A Note from Tosca Lee

The first time I ever blurted out the words “I want to write a novel” I was home for spring break my freshman year in college (this is 1989 for those counting ;). I was telling my dad how I loved that a great book was like a roller coaster with its ups and downs, twists and turns. And then I blurted it out: I want to write a novel.

That day, my dad made me a deal: he’d pay me what I would have made working as a bank teller that summer, if I spent the summer writing that novel and treated it like a job.

It was a no brainer. (I was a horrible bank teller!) So I started my research, gathered my notes and that summer I set to work.

Two days in, I thought, “Wow, this is really hard!” I had no clue what I was doing. But I wrote through it, powered by a dream of seeing my books on a shelf one day, of afternoons spent on the phone with my agent or editor.

The dream didn’t go much further than that at the time. Neither did that manuscript, which rests in a crate somewhere in my basement like a skeleton.

Today, 30 years later as I finish my 12th to-be-published novel, the dream is different. I still want to build roller coasters, but the reason has changed. Because I’ve lost track of the readers who have told me, sometimes through tears, how important novels have been during trying times in their lives: during a difficult marriage, while caring for an ailing parent, in the midst of illness, recovery, or psychological challenges. When they couldn’t work, felt alone, or otherwise simply needed to escape, if only an hour at a time.

That was me, once, struggling through my first marriage. Dealing with OCD and anxiety. Needing to slip into someone else’s skin, if only for a while.

Today I don’t consider myself a novelist so much as a purveyor of bespoke, healthy escape—even if only from boredom. It’s a job I am humbly thankful to every reader for, every single day. Because I do it with the belief that we read—and write—not just to set real life aside for a time, make sense of the world, or to have fun (a pursuit I take seriously) but to know, ultimately, that we are not alone.

You may not know me, you may not have read my books. But I’m thinking of you today, as I work at my desk. And I am grateful.

A Note from Jennifer Mitchell, Bibliolater

She has also written The Line Between which is in development for television! Learn more here: https://deadline.com/2019/01/edward-burns-radar-developing-the-line-between-thriller-novel-for-television-1202538907/

Start your year off right with a great, new release fiction novel by subscribing to Book of the Month! 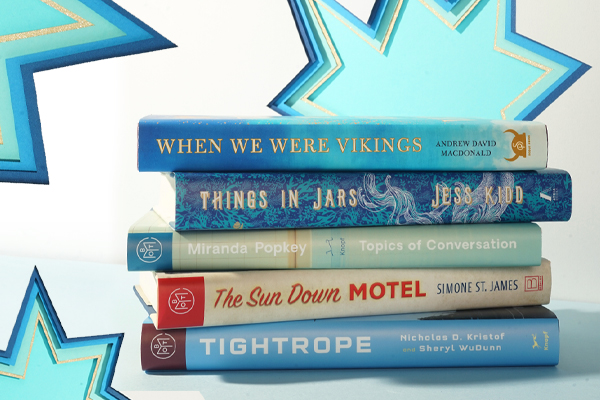 Emma Lord’s debut novel, Tweet Cute, is a remarkable YA novel. It’s charming, sweet and so very funny…..It is also….dare I say it? It’s CUTE. I love how Emma Lord incorporates teen social issues. The characters – as most teens do – are trying to live up to their parent’s expectations. They do not quite realize that it is OK to be who they are yet. They are unsure how to fully express themselves to their family and peers. They are basically living their best awkward teenage life. Pepper and Jack (ship name: PepperJack) are adorable from the get-go. I love that their relationship is not insta-love (authors take note – there is a little too much insta-love out there). Pepper and Jack slowly build a friendship first and then become more. The Twitter war between Big League’s Burger and Girl Cheesing provides some awesome comedic relief. Social media can be such a daunting beast for any age. It is great seeing the two teens take it on. Recommendation: A dynamic read. Readers looking for a funny, teenage rom-com will not be disappointed. Rating: ⭐️⭐️⭐️⭐️/5. For the blurb and more YA recommendations, click on the link in my profile. Special thanks to @netgalley and @wednesdaybooks for the advance copy. Tweet Cute releases on January 21.
Let’s talk about our book backlist. Mine is forever long and so to support @randi_reads and her #stackofshame2020 giveaway, here is the smallest of portion of my backlist. My goal is to read all four by the first half of 2020. Totally do-able for most but not so much for mood readers like me. Anyone who would like to participate in Randi’s challenge, post a backlist stack using hashtag #stackofshame2020 by 12 pm Friday. Winner will receive a $15 gift card. #qotd: How do you manage your TBR? Do you just accept you can’t read them all and pick by mood? Do you make a list? Do you use Goodreads or a bullet journal? Give me your thoughts!
My January @bookofthemonth selection came and I cannot wait to dive in! A mystery and a ghost story in one? Yes please!! As a BOTM member, you can get early releases (like this one) frequently. And if you have a reading goal this year, what’s a better way to tackle it then with BOTM? DM me for more details if you’re interested. #qotd: The Sun Down Motel is a February release. So tell me....what late January or February release do you want to read the most?
Book Review Special thanks to @stmartinspress for the advance copy! Fans of Where the Crawdads Sing will simply adore Big Lies In a Small Town, a beautifully written historical fiction filled with small town prejudices. It is a gripping and captivating story that interweaves two different time periods flawlessly. The entire plot centers around the mystery of an extremely odd painting from 1940. The story behind the painting is that the painter, Anna Dale, went insane. But is that the true story? And why in 2018 does the now deceased artist, Jesse Jameson Williams, task Morgan Christopher, a young woman with a uncertain future, with restoring the painting? Morgan has never restored a painter in her life! I love the fast pace of Big Lies In A Small Town and how the mystery unfolds through every secret and every lie. The main characters – Anna, Morgan, Oliver, and Jesse are realistic and relatable. I enjoy how they all make amends with the mistakes of their past. Lastly, I love that the ending is not as predictable as one would think. This makes Big Lies In A Small Town all that more compelling. CW: rape, racism, sexism Rating: 🎨🎨🎨🎨/5. For a little bit more (blurb and book recommendation), click on the link in my profile.